A downloadable game for Windows

Stranded on a hostile alien world, you'll have to rely on your wits to survive.  Fortunately your wits are being augmented by a neural link with your hi-tech exosuit, allowing you to slow and pause time as you wish.  Will this give you the tactical edge you need to defeat this world's strange inhabitants and escape back into space?

The design goal behind this one was to create an 'analogue' Roguelike, i.e. one without the traditional grid and that gave the player a much finer degree of control than usual.   Everything else flowed from that.  If you ever wanted to play SuperHot in space with random generation this is probably the game for you!

Unzip the zip and run VoidShell-7DRL.exe to play.

The game can be played with keyboard & mouse, but an XBox 360 or One controller will provide the optimal experience.

This is a near shot to what I REALLY WANT REALLY BAD!  An open world metroid prime with nearly no barriers!  lol  Cool game!

Very Interesting take on roguelike real-time-turn based combat lol.  Sorta Risk of Rain meets Super hot.  I like the concept of rerouting power, and since the game waits for you to act it doesnt feel impossible like in other real time systems.  The base gun felt pretty weak though, for the size of the projectile it seemed to pass through enemies a bit.  Also aiming felt like a trap, since turning and moving caused the enemies to move at the same rate you were better off just moving & aiming at the same time.  The world is a little empty, but the smoke trails to denote item locations (especially cool seeing some coming down) helps and works well thematically.   I never found the rapid fire upgrade but the sniper felt underpowered, I was really hoping it would drastically increase projectile speed, cause long range shots were pretty difficult!  Oh a slight bit of air control would be nice, since trying to descend a hill might send you flying down further than you intended, even more so with the speed upgrade.  I did manage to escape though!  Took about 6 tries I think, mostly was 2 points in bomb ,1 in speed :D 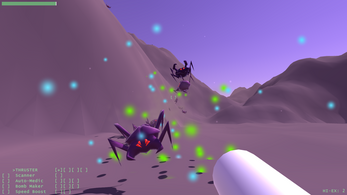 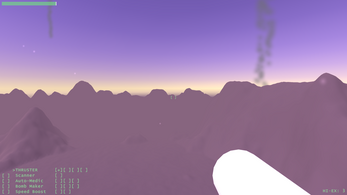